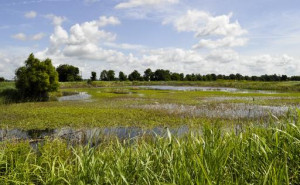 In an extension of a battle over freshwater that has been building for decades, Florida filed a lawsuit against Georgia in the U.S. Supreme Court over Georgia’s use of water from interstate rivers.  The rivers at issue connect in southern Georgia and pass through Florida’s panhandle before meeting the Gulf of Mexico at Florida’s Apalachicola Bay.  Because the freshwater from these rivers regulates the growing conditions of the Bay’s Eastern oysters, Florida’s Eastern oyster industry and its recent collapse is a focal point of Florida’s complaint.

Eastern oysters (Crassostrea virginica – also known as American, Atlantic, or Virginia oysters) naturally grow in waters with a salinity of 5-30 parts per thousand (ppt), or brackish water.  Brackish water is lower in salinity than average seawater (35 ppt) but higher in salinity than freshwater (<0.5 ppt).  Eastern oysters are commonly grown in estuaries, where freshwater meets and mixes with the ocean, because of the brackish qualities of estuarine water.

In short, oysters need at least some freshwater for commercial-level growth.

The Rivers at Issue and Resources at Stake

Florida, Alabama, and Georgia have been in water battles concerning Georgia’s use of the Chattahoochee and Flint Rivers for decades.  Both rivers’ headwaters originate in Georgia and are riddled with dams regulated by the Army Corps of Engineers to meet Georgia’s water demand.  The Chattahoochee splits the Georgia-Alabama border and both rivers converge at Lake Seminole at the Georgia-Florida border to form the Apalachicola River.  The Apalachicola River flows through the Florida panhandle to meet with the Gulf of Mexico.

Florida says that Georgia’s increasing extractions from the Chattahoochee and Flint Rivers are drying up the Apalachicola River, basin, and surrounding floodplains.  The Apalachicola River region hosts Florida’s largest river floodplain forest; the greatest number of freshwater fish species in Florida; over one hundred species that are endangered, threatened, or species of concern under federal or state law; the second largest national estuarine research reserve; and, until recently, 12% of the nation’s Eastern oyster harvest.  In an effort to protect these and other resources, Florida recently filed a lawsuit against Georgia in the U.S. Supreme Court.

According to Florida’s complaint, Florida, Alabama, and Georgia have been involved in litigation and attempts at negotiation since 1992, when the states began a comprehensive study to determine the needs of the states and the Apalachicola-Chattahoochee-Flint Basin (ACF Basin) to allocate the water supply.  The litigation did not address equitable shares of the ACF Basin waters between states and the states never reached an agreement through negotiations.

Florida alleges that Georgia has been extracting significantly more water from the Chattahoochee and Flint Rivers to meet its growing municipal, industrial, and agricultural demand for water.  Flows in the Apalachicola River in 2011 and 2012 were two of the lowest flow years since the U.S. Geological Survey started monitoring the river in 1923.  As a result, less water has been reaching the Apalachicola Bay, one of the most productive areas for growing shellfish in the Gulf of Mexico.  Georgia’s water extractions from the ACF Basin are predicted to double by 2040.

Florida’s complaint states that, until recently, oyster farmers in the Apalachicola Bay produced about 12% of the United States’ Eastern oysters.  In the 2012-2013 winter harvest season, oyster landings collapsed.  Landings were 62.3% lower than the previous five years’ average and the lowest that the Florida Marine Fisheries Information System ever recorded in the Bay.  The surrounding economy suffered.  In August 2013, the U.S. Department of Commerce declared the Apalachicola Bay collapse a commercial fishery failure.  This 2013-2014 winter season is reportedly already experiencing another diminished harvest.

Florida’s complaint alleges that depletions in Georgia’s portion of the ACF Basin altered the salinity of the Bay and caused the oyster collapse.  Florida is asking the Supreme Court to enter a decree equitably apportioning the ACF Basin waters, to enjoin Georgia “from interfering with Florida’s rights,” and to cap Georgia’s water uses at 1992 levels.

It is not new for neighboring states to battle at the Supreme Court over waters that affect the oyster industry.  In 1931, the Supreme Court decided a similar case, New Jersey v. New York, 283 U.S. 336 (1931), involving New York’s growing diversions from the Delaware River and,  among many other issues, its injurious effects on New Jersey’s oysters due to increased salinity.  Although other harms to New Jersey would have been avoided by limiting New York’s extraction to 600 million gallons per day, the Court instead limited New York to 440 million gallons per day – the level that would avoid harm to New Jersey’s recreation and oyster fisheries.

Even if the Supreme Court takes Florida’s case, it will likely not issue a decision for years.

Unfortunately, current oyster farmers may not be able to keep the Apalachicola Bay oyster industry afloat until the Supreme Court makes a decision.  If there is not enough fresh water in the Apalachicola Bay to support a commercial oyster fishery, it will likely not be economically viable for oyster farmers to wait and hope for Florida to succeed in bringing more freshwater back to the Bay.

It would likely be faster for the states to come to an agreement through negotiations but, considering past efforts and tenacious statements by both states’ Governors, the likelihood of that happening seems slim.

This article was originally published in the Winter 2013 Fisheries Law Update.