While visiting Anilao to visit the marine protected areas, I had my first encounter with a tribal group called ‘Badjaos’. In Anilao you often see them walking the beach selling pearls but I quickly learned their history is much more. As a local volunteer, who has opted to share this thought anonymously, later explained their connection with the sea could make them a useful partner in the conservation of the seas.

WANDERING SOULS OF THE SOUTHERN LAUT

I was only eleven but I could still vividly remember these young boys treading in deep water next to our lantsa (boat) which was docked at the Port of Virac in my parents’ home province of Catanduanes. While waiting to voyage, passengers onboard threw coins into the water and these young boys would deftly dive to collect the coins before they could sink to the bottom. “They are Badjaos from Mindanao.”, explained Papa. I also remembered a scene in a ‘70s black and white movie wherein a new-born baby was ritualistically thrown into the sea by his Badjao father. I was amazed. Three decades later, I would encounter them again, this time in Anilao, Batangas.

The Badjaos, known as Sama or Samal, are a Muslim indigenous ethnic group traditionally from the Sulu Archipelago in the Philippines, the coastal areas of Mindanao and northern Borneo. For centuries, they lived a nomadic, seaborne lifestyle; living in small wooden sailing vessels called perahu , lepa-lepa and vinta. Badjao groups blended culturally with their land-settled cousins – the Sama groups, into what is now known as the Sama–Badjao people. However, these distinctions are fast fading as majority of the Badjaos have abandoned their way of life and now live in Sama–style piling houses in the coastal shallows.(1)

Interestingly, the “Sea Gypsies” do not call themselves Badjao but by the names of their tribes, usually the place they live or place of origin. Each sub-group has their own unique native language called Bahasa Bajau or Sinama of the Western Malayo-Polynesian language family (3); cultures and tradition. However, certain sub-groups are able to understand the languages of other sub-groups. Their shared vocabulary and general genetic characteristic draw these sub-groups to accepting the general term “Badjao”.

Religion varies from a strict adherence to Sunni Islam, forms of folk Islam, to animistic beliefs in spirits and ancestor worship. Communities lack mosques and they must rely on shore-based communities such as those of the more Islamized or Malay peoples. Due to their nomadic marine lifestyle, the Ubian are much less adherent to orthodox Islam, and practice more of a syncretic folk hybrid, revering local sea spirits, known in Islamic terminology as Jinn. A small minority of Badjau are Catholics. (4) 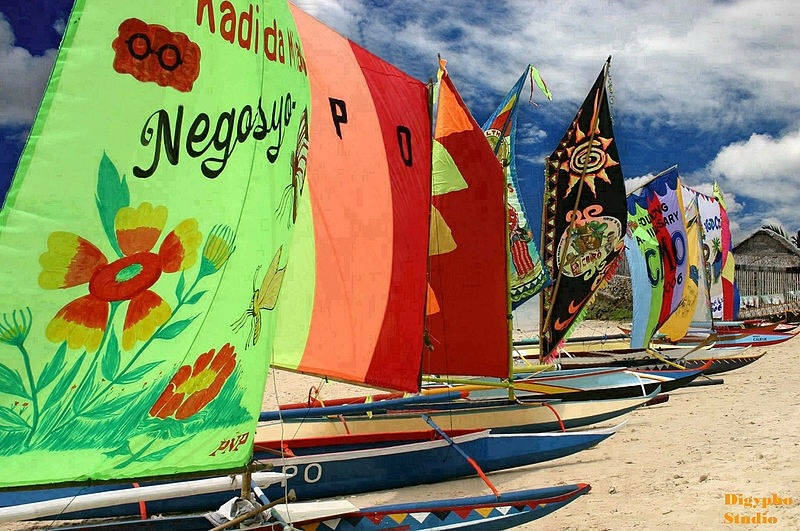 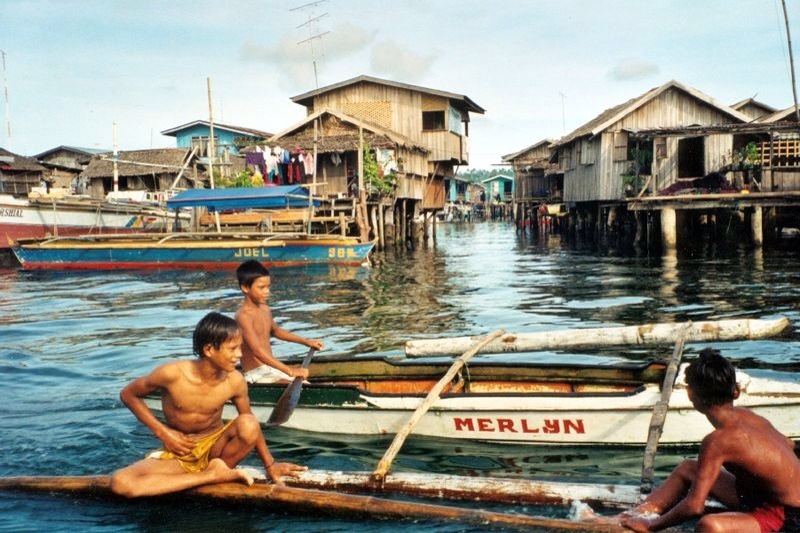 Badjaos of the east coast have retained remnants of their traditional pre-Islamic beliefs. Traditional Badjao communities have an adukun (shaman) and adhere to taboos in the treatment of the sea and other cultural aspects. The east coast Sabah Badjaos are also famous for their annual colourful Semporna Regatta. Spirit mediums among the boat-dwellers in particular, are consulted for a public séance and nightly trance dancing. During epidemics, these mediums are also called upon to remove illness-causing spirits from the community by setting a “spirit boat” adrift in the open sea beyond the village or anchorage. (5)

Badjao fishermen use wooden sailing vessels known as perahu lambo for far voyages and construction and launch of these vessels are ritualized and are believed to have a Sumanga (spirit).(6) Badjaos are also known for their exceptional abilities in free-diving, with physical adaptations that enable them to see better and dive longer underwater; some for five hours daily. (7) Some Badjao intentionally rupture their eardrums at an early age in order to facilitate diving and hunting at sea; resulting in hard of hearing.(8) Obviously, equalization, as emphasized during my scuba diving lessons, was not an option. On the other hand, west coast Badjaos in Malaysia are expert equestrians. Badjaos are also well known for their weaving and needlework skills and have a unique type of wedding dance called the Pangigal which is famously danced to the music Dayang-dayang.(9)

For most of their history, the Badjaos have been a nomadic, seafaring people, living off the sea by trading and subsistence fishing(10) and are a peaceful people. They kept close to the shore by erecting houses on stilts, and travelled using their handmade boats which many lived in. (11) However, in the last five decades, many of the Filipino Badjaos have migrated to neighbouring Sabah, Malaysia, Sulawesi and North Kalimantan in Indonesia and the northern islands of the Philippines to escape the armed conflict in Mindanao which has disrupted traditional sea routes; as well as discrimination from the dominant Tausūg people and the majority Christian Filipinos. (12) We are reminded of last year’s siege of Zamboanga City by Muslim secessionists which displaced many Badjaos from their traditional coastal communities; forcing them to settle along the city’s crowded shore. Others have found their way to the rich and marine bio-diverse secluded bay of Anilao, Batangas. 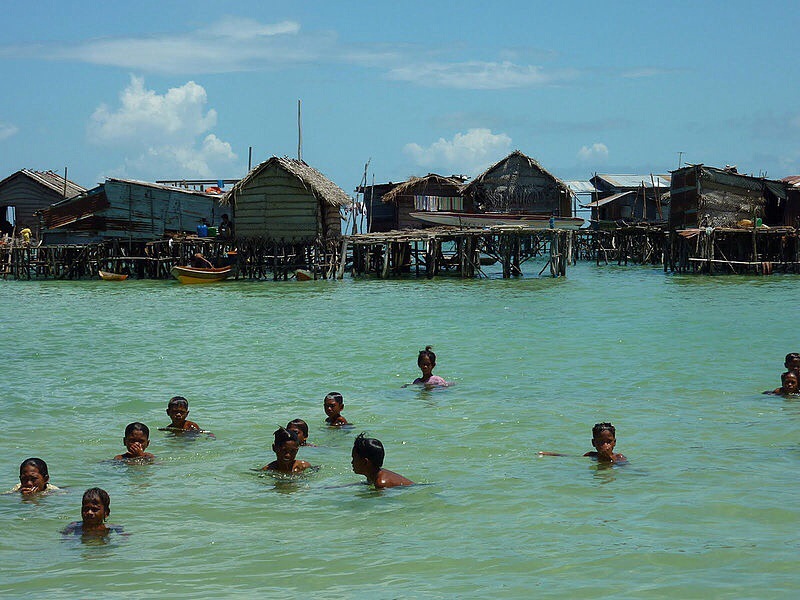 “They are Badjaos,” said the Bantay Dagat (Guard the Sea) volunteer while pointing to a small outrigger banca just offshore. I saw two men and a young boy onboard using wooden paddles; their afternoon shadows cast on the pristine waters. Etched memories of my boyhood saw the young boys diving for coins.

For many week-end warriors like me, Anilao has been a mecca not only for scuba diving but also for windsurfing – the bay with its consistent winds plays host to the national team. Located in Batangas near the Verde Island passage, the area is said to be home to the center of marine shore fish biodiversity. Part of the Coral Triangle which is bounded by Borneo, Indonesia, Solomon Islands, the Philippines and the northern part of Australia, this is where the largest concentration of coral reefs in the world are found. (13) Based on research, the Philippines alone has 2,724 species of fish, 1,062 seaweeds, 500 species of hard corals, 42 species of mangroves and 25 species of marine mammals (14) including the largest sea mammal called the butanding or whale shark and the dugong or manatee.
To conserve and protect their marine environment, local communities in Anilao and nearby municipalities have formed marine protected areas (MPAs) which is a defined geographical area dedicated and managed through legal instruments to achieve long-term conservation of nature with associated ecosystem services and cultural values.(15) Found mostly in front of diving resorts, these MPAs aim, among others, to conserve the composition, structure, function and evolutionary potential of biodiversity; maintain assigned values in perpetuity; and possess a clear and equitable governance system. (16)

The Badjaos impact on these MPAs.

With their once free, seaborne lifestlyle, they have been reported to fish within these protected areas and have harvested the endangered Taclobo or giant clams which were seeded within these areas. Some also are ambulant vendors, selling trinkets, shell crafts and pearls to resort guests; with some being met with annoyance, if not consternation. I was told that there now even exists a barangay of Badjaos in the bay which is reportedly being supported by local politicians – ready voters in the nearing elections.
MPAs are envisioned not only to conserve and maintain diversity of habitat and associated species and ecosystem but equally important, to achieve long term conservation of cultural values.(17) But long before the hallowed concept of an MPA has evolved, the Badjaos for centuries, have already mastered the fine, sensitive art of maintaining the balance of their marine environment; of conserving and preserving our seas by living off the sea and taking only what they need while respecting the old ways of the Southern laut.

Debates in legislating a comprehensive management code for Anilao are rife. Perhaps, our learned lawmakers should also put to mind the Badjaos – with their masterful and deep knowledge of the seas, excellent sailing and navigation skills, their unique and colourful culture and beliefs; and integrate them in their legislative fiat. They can make able boatmen and their boat-building skills can be put to good use. Their exciting regatta, songs and dances can draw in many spectators while their colorful tapestries and trinkets can find a niche in the local consumer market. But more importantly, the Badjaos can impart their extensive experience and knowledge of the sea and its various flora and fauna to tourists, volunteers and the academe; and play an active and direct role in guarding the bay. Perhaps, the legislators do not have to search far and wide for some of the answers to some of their age-old questions; and so-to-speak “reinvent the wheel”.

And for the Badjaos, perhaps it is in Anilao where they will finally be blessed again by Omboh Dilaut, the God of the Sea; protected from the evils of stark poverty which has befallen many of their breathren. Perhaps, they will find home again.

*Pictures were retrieved from En.wikipedia.org/wiki/Bajau